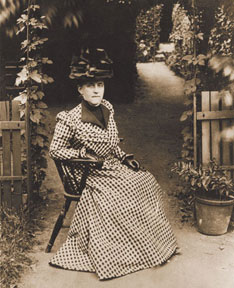 For our exhibit, our group will be focusing on the visionaries of City Beautiful. People such as Mira Lloyd Dock and J. Horace McFarland are the reason why City Beautiful was such a success in Harrisburg. Dock, whom Paul Beers calls “the unlikely Joan of Arc for Harrisburg” was a spinster living on Front Street.  She travelled to Europe in 1899 where she saw the many improvements made to the cities. This trip would increase her concern for civic beautification and give her the inspiration for her “Harrisburg Idea.”

In December of 1900, Dock went before the city’s Board of Trade with a speech that would help bring City Beautiful into existence. She claimed that the city’s inhabitants didn’t understand “the cash value of cleanliness and beauty.” The speech spurred the creation of the Municipal League and helped her gain allies in McFarland and Vance McCormick. Harrisburg’s City Beautiful is so unique due to the fact that it was started by (of all people) a woman.

Dock also founded the Civic Club. The Civic Club was very influential in advocating for the changes needed in the city. The women advocated for better sanitation and garbage collection and were often praised by men for their services to the movement.

Another influential proponent of City Beautiful was J. Horace McFarland. McFarland was a friend and ally of Mira Lloyd Dock. He was secretary of The Municipal League for 45 years and later president of the American Civic Association. His interest in plants and nature helped lead him to urban reform. He hired landscape architect Warren Manning and sanitation engineer James Fuertes to help redesign the city’s sanitation system and parks. In 1914, McFarland published “The Awakening of Harrisburg,” praising the changes made to the city.

We are so excited to be learning more about these visionaries through the Pennsylvania State Archives and Dauphin County Historical Society! Check back to see our discoveries!

6 thoughts on “The Visionaries”