Cities all across America in the early twentieth century pushed for the implementation of parks and other open spaces. This movement is known as “The City Beautiful Movement” and it was a push to beautify and improve American cities. Among these cities was the capital of Pennsylvania, Harrisburg. Vance McCormick, the mayor at the start of this movement, championed improvement in the year 1902 as part of his own successful bid to become mayor.McCormick and other like-minded reformers advocated paved roads and a safe water supply as well as an increase in the number of parks within the city limits.

The photograph to the left shows a trolley with an advertisement for improvement in the year 1903.

In 1901, McCormick created a committee named The League for Municipal Improvements. This committee was made up of local citizens who were interested in the future of the city and invested in the improvements they deemed necessary for its expansion. The League for Municipal Improvements was in charge of securing the funds for improvement and campaigning for the movement. George P. Donehoo, a clergyman, and famed Pennsylvania historian notes the reformers listed in a 1901 article in The Telegraph who donated their own money to initiate the campaign. Many of these were part of the Municipal League.

In 1902, the committee sought to pass a one million dollar bond issue which would provide the city with the funds to go through with improvement. The bond would be decided through a city-wide vote. The original reformers saw the importance of campaigning, so they utilized newspapers and signs to influence the citizens of the city to vote in favor of the bond issue. The photograph on the left shows an example of an improvement campaign advertisement  (The building on the right is where the League of Municipal Improvements was located).

Whether the campaigning influenced the voters at this point is not clear. There is a distinct correlation between the voting outcome in the wards and where each of the reformers lived. Nine of the reformers lived directly around the city capitol in Wards Three and Four, which voted strongly in favor of the improvements. 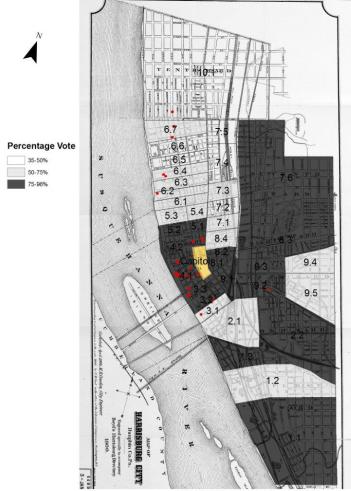 The highest concentration of reformers resided in Ward Four; which was home to four reformers. This information is significant when considering the outcome of the 1902 vote for improvement. Ward Three was home to the second highest concentration of reformers, and it also had a high percentage of votes in favor of city improvement. The map on the left shows the residences (red) of some of the principal reformers in the improvement campaign of 1901-1902 against the background of how the city voted in February 1902 for the one million dollar bond issue to support improvements.

One thought on “The City Beautiful Reformers”