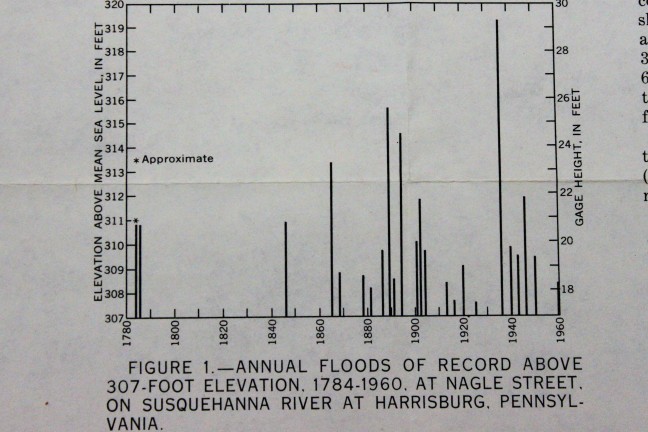 As a first time visitor to an archive, I really did not know what to expect. I thought that it would be similar to a library but much bigger. Images of clustered shelves with dusty papers came to mind. Of the two archives that we visited, the Pennsylvania State Archives could not have been further from my conception. The State Archives house thousands of pieces ranging from topics that cover all aspects of Pennsylvania. As for me, I was looking into flooding in the city of Harrisburg. The items at the archive range from government records to personal collections. Many of the best information about the City Beautiful movement can be found in the personal collections that have been donated to the archive by families. Some of the best artifacts can be found in the Mira Dock lantern slide collection. You could spend hours in the archive filling out calling cards and having them bring boxes down from their storage. There is so much information that it was a bit difficult to find stuff specific to my topic. Many of the artifacts around flooding were referring to the famous Johnstown flood of 1889. This was the most devastating flood in US history and the images from it are astounding. 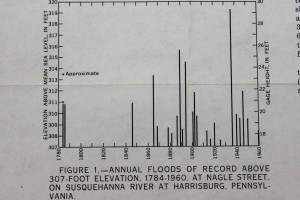 I was able to find a large map that depicted the flood of  1936 in Harrisburg. While it was later than the time period I was looking at, it referenced floods of 1889 and 1894. The map had parts of the city shaded blue to show the level to which the water rose during the flood of 1936. Alongside the map were tables showing how the 1936 flood compared to floods in the past. It was awesome to see an official flood report map  instead of just looking up the data and figures online, and it helped to understand how prone to flooding so much of Harrisburg is.

The Dauphin County Archives, on the other hand, were much closer to what I had imagined. I could smell the old paper as soon as I walked in. And there was a big wooden table in the middle where we would be working. Their collection is all related to events in the county. Here I was able to find great artifacts regarding the floods of Harrisburg such as pictures and newspaper clippings of the 1889 flood. The photos in particular were amazing. They caught not only the destruction that came with the flood but also showed how the people were dealing with it. And how life in the city was affected by it. My goal in research is to look into how much of an impact these floods had on the City Beautiful movement. Leading up to the start of the movement there were floods in both 1889 and 1894 that were particularly devastating. They are the third and fourth highest floods in the city’s history. By looking at images and newspaper articles I hope to see just how much of an impact these floods on the city.

I especially enjoyed working in the Dauphin County archives, not only because of my success in finding artifacts but also just because of the feel. There was an organic nature to the Dauphin county archive that was inviting — at least compared to the formality and security of the State Archives. It would be fascinating though to take a tour of the State Archive though, and to walk through and see the stacks of their collections and all that goes on behind those gray metal doors.