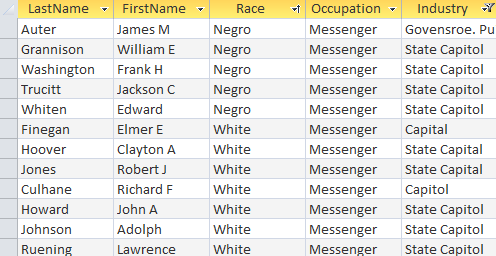 As we finish our work in Digital History, I struggle to realize the end of my college experience. I took five years to complete my degree due to working full-time during my time at community college and a change in major two years ago. As a History major with a concentration on public history, I don’t think it’s really expected I take courses on public history and digital history my last semester. However, it aligned very well with my work through the Center for Public Humanities and Digital Harrisburg Initiative where I was able to incorporate my learning experience into real projects for the community.  My work in the Digital Harrisburg Initiative focused on research for the Commonwealth Monument Project and composing biographies. My final project for Digital History expands my research. In Harrisburg about a dozen African Americans were employed as messengers at the State Capitol. I first did research on James Auter, one of the messengers, and quickly found a copious number of articles on him and the positive reputation he had within the government and city of Harrisburg. I decided to expand this research to his colleagues and noticed a repeated connection to Robert J. Nelson.

It was a year and a half ago I presented on StoryMaps in Historical Methods with desire to use its platform to enhance my skills and storytelling abilities. By incorporating various aspects, images, text, and maps, the visitor experiences different dimensions of a story left on paper. There is an odd foreshadowing that this project has contributed to my life. Of all historical arguments I could have made, I chose to look at a possible friendship between two men. I needed something lighthearted, and I think I needed to tell myself  that there is more than what is left on paper. I know it is a cheesy and fake argument, but I had to argue with myself that there is more to life than what is left behind.

I did the project twice. I tried to write this blog several times, but tears come each time. Thursday when I went to present my website, something happened and all my work was suddenly gone. I had to walk away for the night due to my frustrations, but Friday morning I got worse news. A friend I couldn’t bring back to life was close to losing hers. Suddenly my project on friendship made so much more sense. 100 years from now, this grief won’t be in the newspaper. Even this semester I’ve hidden from myself how loss was coming sooner than later. So when I had to do a project on something I was passionate about, of course my subconscious would choose a friendship that goes beyond historical records.

One of the first events that Auter and Nelson worked on together featured a speech by Harry S. Cummings which featured “a Hopeful View of the Negroes’ Future,”

Auter and Nelson lived through the shift in workplace dynamics. Auter and Nelson heard a hopeful speech, and then faced reality together. But they weren’t discouraged, instead they kept providing for their community ways to be empowered. Even though I focus on their friendship, these articles about their community work combined with the work environment they faced offers a tug-of-war that I wish was more obvious. Were they both optimistic or did one have to keep reminding the other not to get too down? Did they spend hours after speeches discussing what they agree and disagree with?

While my Story Map project doesn’t offer sharp conclusions, it’s because these everyday moments that we know shape a person aren’t dramatic enough for the paper. No, I don’t want a newspaper to cover private conversations. But I want historical practices to leave room for imagination. I wouldn’t present this research at a conference, but I fear we spend so much time looking for the deep arguments that we lose the reality of how human these people still can be. Auter and Nelson are my comforters, signaling to me that even though close memories aren’t included in historical records, they are as valid as you allow them to be.