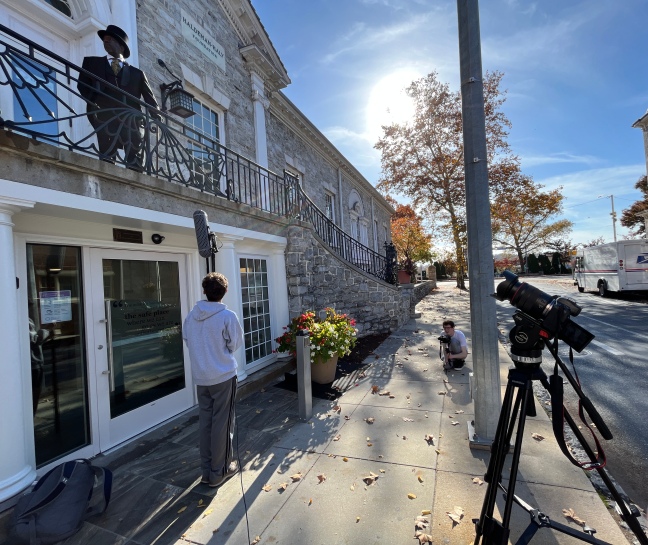 Throughout the past month and a half, I have been working with student fellows Center for Public Humanities at Messiah University and the Past Players, who are affiliated with the McCormick Public Library in Harrisburg, Pennsylvania, to produce a series of videos that will be used for an online, interactable, virtual tour. As of right now, my group and I have filmed four out of eight of the Past Players speaking and acting in full character to our cameras, just as they would on the in-person tour. We plan on filming the rest of the Players this week (11/6 – 11/12) and then working together to edit the footage into videos that look something like this:

In addition to the on-site filming, we were able to attend a workshop where Mr. Sloan and the Players practiced their lines to capture the overall essence of the historical figures they represent. During this shoot, my group and I worked to catch small snippets and highlights of the meeting with the hopes of using this footage as a behind-the-scenes-style video. This allows viewers of the tour to see what it takes to produce a project that is meant to educate and inform the public about their shared history and memory. This was my first time ever filming or working with any kind of actor, so it was eye-opening to see how much time and effort it takes to “get into character” and continue that over the span of two hours. There were points during the workshop where I could not help myself from smiling because I was watching these historical figures, whom I had researched for countless hours, come to life right in front of me. This continued while we filmed the Past Players in costume and while I monitored the audio levels and listened to the voices of Martin J. Delaney, Harriet Smith, William C. Goodrich, and Thomas Morris Chester. I envisioned visitors coming to the library, walking to the T. Morris Chester Welcome Center, and sitting down at one of the monitors to watch and explore Harrisburg’s African American history.

Knowing that a project like this has the ability to impact people from all generations while also teaching local and national history from the “firsthand” accounts of those who lived during the age of Reconstruction, Jim Crow, and Pre-Civil Rights has been moving. Please stay tuned for more updates as well as continue our project through the rest of the fall semester.

One thought on “Update: Retelling Harrisburg’s Historic African American Community – Spirited Back to the City”