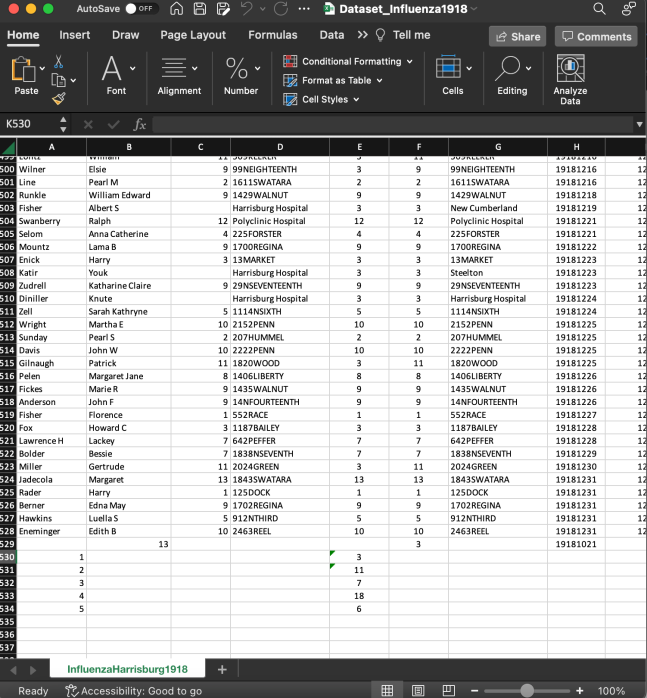 While the historical profession is traditionally portrayed as a discipline where scholars are found researching in dusty libraries or writing “boring” history books, there has been a growth in the technological aspect of historians’ lives over the past two and a half to three decades. To be more specific, historians are now expected to count not just the amount of books they have but populations, census data, and statistics based on people groups in particular locations. If you have explored this website at all, you may have been able to conclude that its primary purpose has been to show how historians change data series into new and more readable forms like interactive maps to represent the history of a particular place, which is Harrisburg, Pennsylvania.

Recently, in my Digital History course, we have been practicing analyzing different kinds of data by using programs like Microsoft Excel and Microsoft Access for the purpose of developing the skills necessary to complete similar tasks as we move into an independent careers. Our first assignment was called “Digital Analysis Lab: Harrisburg’s Population in 1918-1920,” and we were tasked with choosing between two spreadsheets, one which organized data from the 1920 Harrisburg Census and the other referred to those who fell victim to the 1918 Harrisburg Spanish Influenza. I decided to go with the 1918 data set because I felt it would be interesting to study those numbers, considering the recent memory of the COVID-19 pandemic and how international health crises affect historic population centers.

We were given a worksheet with fourteen questions, and depending on the different functions that the question wanted us to use, we would get certain answers for the data set that we were focusing on. These are my answers were as follows:

I am not the best when it comes to math, numbers, and formulas, especially when we were taught how to do everything in one class period, but I was at least able to understand how beneficial it is for historians to use data and computers to help do digital history. An interesting perspective that I have recently come across from Adam Crymble in Technology and the Historian looks to clear up the question of whether historians who work with data like this are still doing “digital history” or even history. He writes, “[i]f one’s work involves interdisciplinary quantitative historical research, call it that. If a historian is pushing the boundaries of user engagement studies, say so. If the goal is to discover new means of encouraging effective collaboration in the history classroom, then frame the conversation so that it contributes to wider discussions on that issue. Historians need to keep pushing the boundaries with technology, but they must stop calling it “digital history” when something more specific better reflects what they are doing” (1). After working on this assignment, I can understand the frustration over why certain scholars feel the need to differentiate between “traditional historians” and “digital historians” (if there even is such a title), but I do feel that there is a place for historians to be successful in working with technologies such as Excel and Access. Our contemporary world calls for such a broad skill set when it comes to computational tools and programs; I am sure that history programs in the future will implement mandatory computer science-style programming into their curriculum.

(1) Crymble, Adam. Technology and the Historian: Transformations in the Digital Age, University of Illinois Press, 2021. ProQuest Ebook Central, http://ebookcentral.proquest.com/lib/messiah-ebooks/detail.action?docID=6532324.
Created from messiah-ebooks on 2022-11-15 21:43:36.