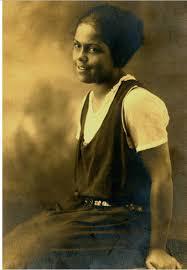 My Contribution: I published poetry in Harrisburg newspapers, performed and served as an Honor Roll student while in the Harrisburg School System, and contributed to the Harlem Renaissance as a poet.

My Legacy: I was an important artist and poet of the Harlem Renaissance who was educated for a time in the Harrisburg School District. I read “To Usward,” a tribute to novelist Jesse Fauset, at the now famous Civic Club in New York, which launched the Harlem Renaissance. I started a support group for other artists and writers that included Langston Hughes, Countee Cullen, and Zora Neale Hurston. My poetry is still studied today. I kept a scrapbook from my days in Harrisburg, which is still on file at the Schomburg Center for Research in Black Culture in New York City.

“Oh, little brown girl, born for sorrow’s mate, / Keep all you have of queenliness, /
Forgetting that you once were slave, / And let your full lips laugh at Fate!”

— Excerpt from “To a Dark Girl” by Gwendolyn Bennett

Connection to the Old Eighth Ward: I lived in Harrisburg during middle school and high school with my father.

Activism: I was a key agent in the Harlem Renaissance.

Connections: My father was the attorney Joshua Robbin Bennett. I knew Esther Popel, another Harlem Renaissance Poet, from my time on Balm Street.