Yesterday morning, the Dean of the School of Humanities and a small contingent from the history department made a presentation to administrators at our school, Messiah College, about Digital Humanities and new initiatives in Digital Harrisburg. It was exciting.

Our dean, Peter Powers, gave an overview of new movements, activities, courses, and assignments afoot on campus related to Digital Humanities and discussed the birth of new collaborations in the region with Harrisburg University of Science and Technology and Harrisburg Area Community College. (He should be posting his slide presentation online shortly.) The chair of my department, John Fea, discussed our digital Harrisburg work within the context of a redefined public history program. He has shared this remarks at his blog (“A New Kind of History Department”). And Bernardo Michael, professor of history and director of diversity affairs on campus, discussed the contribution of Digital Harrisburg to diversity initiatives on campus.

I was brought in to give a concrete example of the ways that the humanities can intersect with digital media to produce something of great value to both students and the broader public. I began with a Council of Independent Colleges workshop on Information Fluency that I attended two years ago in Baltimore. The team sent by our president to learn about infofluency included Dean Powers, Michael Rice, and myself. For two days, we participated in discussions about the differences between “information literacy” and “information fluency”. Like the distinction in language studies between literacy (the ability to read and write) and fluency (the ability to express one’s self well), information fluency highlights the use, employment, and production of information, rather than simply knowledge of how to access it. I reported on the workshop in this post.

My Digital History class this semester was a direct result of that workshop. Collectively, as a department, we launched a new digital initiative in our department focused on public history, which would include a digital component, and focus on Harrisburg and its environs. Rather than simply show students how to access and consume through databases, websites, and online resources, we began to think about how our students could be producers. We created two classes (Digital History and John Fea’s Pennsylvania History) to help our students become more fluent in information, contribute to the broader discussion in Digital Humanities on campus, and make a public contribution to the history and culture of Harrisburg.

I used my course in digital history as a specific example. Some of the following will sound redundant if you have been following our work at this site, but the following summary overview constitutes a kind of metadata about the project. Twelve students in my class carried out three projects centering on the historic movement of the “City Beautiful” in Harrisburg at the turn of the twentieth century. This civic movement sought to beautify and improve the city by creating new green spaces, upgrading utilities such as roads and sewage systems, and reducing the problems of sanitation and health created through frequent flooding of the Susquehanna River. Many of the impressive buildings and green spaces visible in Harrisburg today, including the Capitol Park, were a direct result of City Beautiful.

I selected City Beautiful as a viable digital initiative for two reasons. First, the movement in Harrisburg is historically significant because it was one of the earliest city beautiful programs in the nation and garnered widespread popular support. Second, the topic is relevant to current conversations about improving Harrisburg. Last year, a group of citizens in Harrisburg launched City Beautiful 2.0, a collaborative grass-roots movement “to address concerns of the city” by reclaiming the spirit and foundations of the original City Beautiful movement. Mayor Papenfuse even made the promotion of City Beautiful 2.0 a short-term agenda item in his recent transition report. 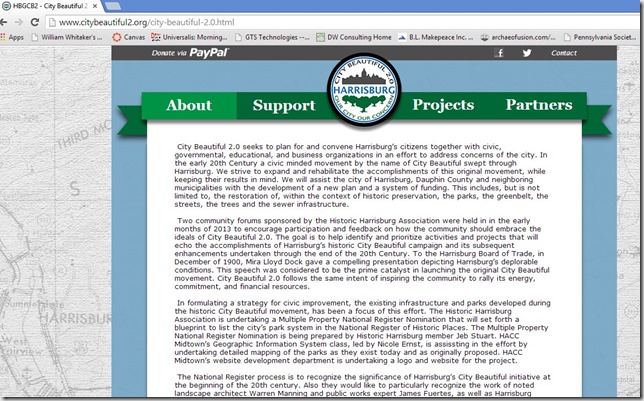 In my course, students are contributing to this conversation through three projects. The first project was to create a legitimate and serious website devoted to the original City Beautiful Movement. For this project, I sent students to Dauphin County Historical Society and the PA State Archives to comb through boxes of documents, photographs, and letters related to the original movement. Students have learned best practices in digitization such as photographing, scanning, and metadata, and are collaborating as a class to create a website for displaying historical exhibits and collections. We are working on this Omeka site now, which should go live on May 6, with the final draft available May 12.

The second project, “The City Social”, was designed to put the people of Harrisburg on the map. Working from scanned copies of the United States census records in Ancestry.com (which you can see above), students transferred information into spreadsheets in Microsoft Excel. These spreadsheets currently contain the records of 28,000 individuals living in Harrisburg in 1900 (60% of the population) and include the relevant social fields from the original census, such as race, gender, age, birthplace, and occupation. In the process, students learned how to produce data, normalize it, proofread it, and analyze it.

By importing this spreadsheet data into MS Access (above), we have created a truly powerful database that has opened up a wide range of new research questions (below). We can ask about the ethnic diversity of the city in 1900. We can ask what percentage of the Russian-born population spoke English, how many Irish worked at the iron mill, and how female literacy rates compared with male. Closer to home, we can ask about the diversity of the original neighborhood of Messiah College’s Harrisburg campus before the college moved to Grantham. 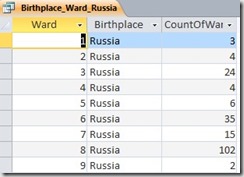 Our student also collaborated with GIS students from other courses to link the census data to a digitized map of the city in 1900. Students from Jeff Erikson’s GIS class here at Messiah completely digitized four wards of the city in 1900. Professor Albert Sarvis’ class in Applied GIS at Harrisburg University georeferenced and geocoded a map of the city in 1900 to display the census data. When the data entry and map is complete next fall, we will be able to project and pattern the population of Harrisburg in 1900 by a wide range of criteria, such as occupation, birthplace, and race (this image below comes from the work of Professor Sarvis’ class). Finally, a student of Professor Nicole Ernst of HACC has been working with Professor Erikson on the broader City Beautiful. 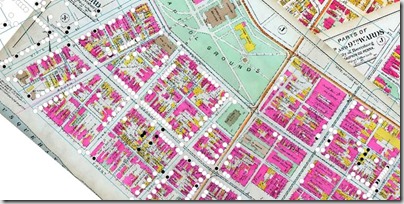 Third, we created this website to act as an immediate portal for publicizing the work of these classes at different institutions. Students learned to craft polished blog entries for the web and in the process, populated the internet with interesting content about Harrisburg’s history.

I summed up by noting how well this Digital Harrisburg project intersects with current strategic initiatives and the mission of Messiah College:

1. Information Fluency and Student Learning: We’re giving our students fluency in information by having them produce it, bridging the learning gap between information and original source.

2. Undergraduate Research: We’re showing our students how the application of digital tools opens up new interdisciplinary pathways to the study of history.

3. Diversity: We’re connecting students to the region’s physical resources and a diverse urban population and context.

4. Community Engagement: We are creating digital products that will have an impact on broader public knowledge of Harrisburg’s history and culture.

5. Collaboration: We are creating new collaborations and connections with government agencies, local historical societies, and educational institutions (such as HACC and Harrisburg University)—as well as with other departments across campus.

All of this, I concluded, is just the start of something much bigger.