A week ago, at the Dauphin County Historical Society, I found my project of interest to be but a small fish in a big sea. Our Digital History class took a trip to these archives to conduct research for our

third project where we will be creating biographies for important figures in the improvement campaign. I chose to focus on African American reformers within the 1900-1902 time frame surrounding the vote. After a long attempt to chase these reformers down through books, newspapers, and the archive’s other resources, I sat defeated at my lack of answers. It saddened me to see the silences history sometimes reveals.

Who but the archivist himself could inspire me to not give up on my project? He told me, “The challenge is when you rise up to the occasion.” With those words of wisdom, I swallowed my doubts and pressed on to continue my search for these lesser known activists of Harrisburg’s City Beautiful Movement. I realized I needed to take history for richer and poorer. Going through the lows of historical research make the highs that much better. 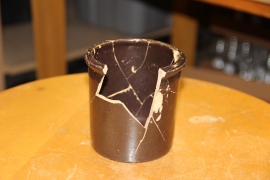 Program on photographs of artifacts. While the outcome of our image processing wasn’t as successful
as it could have been, it was interesting to learn the technique itself. I even got a chance to revisit an artifact I studied for my Historical Archaeology course last year. Jim Mussell in his article, “Doing and Making: History as Digital Practice,” puts it best when he says,

It is the role of historians to make absent contexts tangible, to make the imagined virtual, in order to reconstruct the significance of material from the past. Digital technologies provide powerful instruments that do just this, transforming material so that it can function in new environments, exposing both unrealized aspects of this material and the unthought assumptions that have hitherto structured our engagement with it.

We had really struck this richness of the transformative power

of digital technologies when we compiled our information for our first project. With the help of Dr. Pettegrew, we formulated both a list and map of religious centers supporting the vote for improvement in Harrisburg. This included churches and Christian organizations who hosted campaign meetings and pastors and rabbis who lectured in favor of the improvements. We were very pleased to find the plotting of these religious sites directly correlated with a positive vote, 80-96% in favor, for the city’s beautification. This data suggests these religious centers were successful in their endeavors to promote Harrisburg’s improvement efforts.

I’ve come to learn if I strive through the seemingly poor times of historical research, I can then enjoy the rich and fulfilling times when they come. With that, it looks like it’s “’til death do us part” for history and I.

2 thoughts on “For Richer and Poorer”