Last Sunday my friend Andre Frueh and I jumped in the car and drove twenty minutes from Messiah to the steps of the Harrisburg Capitol. We parked on the street by a meter, where parking is free on Sunday. We may be budding historians, but that doesn’t mean we aren’t on a budget.

Our reason for being there is a bit of a long story, one that involves geographic coordinates, century old photographs, and a software I’m only just beginning to understand. Let me try to catch you up.

As I mentioned in my last post, the Messiah College component of the Commonwealth Monument Project received about 100 high-resolution images from the Pennsylvania State Archives over the summer. We made the most of these pictures of the Old Eighth Ward circa 1911. I organized the images by their location for a Humanities course assignment, and my student colleague Josh Reid combed through and selected photos and developed exhibits of businesses, people, churches and synagogues, and entertainment venues.

We have now advanced to the next stage of this project: mapping out the specific locations from where these pictures were taken and the directions they’re facing. We are doing this with ArcGIS, a popular Geographic Information System software application. ArcGIS is a program that allows the user to layer spatial records (in this case a map of the vanished Old Eighth Ward) on top of up-to-date satellite data. In my case, the process entails placing a point on the coordinate location of each photograph, and recording which direction it faces.

All of this is being done in order to create an ESRI Story Map, which combines text and images to create compelling multimedia narratives, in this case a tour of the Old Eighth Ward, a neighborhood that no longer exists.  Historians at Penn State Harrisburg created a photographic tour of this sort some years ago; our goal here is to work with our collaborators at Harrisburg University to create an updated version using new geospatial tools.

This brings me to our purpose in downtown Harrisburg on a chilly Sunday.  Andre and I walked to the locations of several of the most striking pictures from the photo collection, and did our best to replicate the angle.  This has been an enlightening process.  Quite literally walking these streets that have changed so much in just over a century makes that much clearer the point that if we do not take careful efforts to remember what has been lost, it will vanish in the mist of history.

Our goal here was to bottle up one of the main objectives of this Story Map project: showing how the Old Eighth Ward neighborhood was changed forever by the City Beautiful Project and its lavish expansions. What we came up with was revealing and interesting. It is important to note that the quality of these images would not be the same without the photographic expertise of Andre Frueh; all of his work is just as stellar.

View of Walnut Street (and the capitol) From Fourth & Market

What you see above is a view of the capitol from Market Street. It was really fascinating to see how similar the landscape still is, despite being wildly different. The church is not too far removed from its 20th century equivalent, but the tiny shop that was once next to it has been replaced by Temple University’s massive hulk of a building. 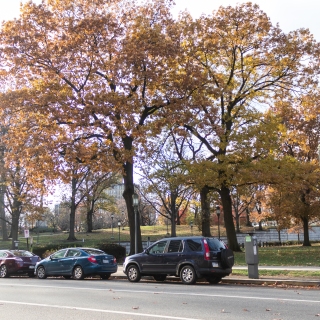 The above image tells a different story however, the view in both pictures is from 417 Walnut St. The 1911 photo depicts some shops at 410 and 412 Walnut Street, one of them a laundromat, a place where citizens came and went, and some inhabitants earned their livelihood. The modern-day image shows a view of the Capitol grounds on the South Side. The autumn leaves have fallen picturesquely on the stone walkways. The shiny railings go nicely with the orange sheen the ground adopts, and on a Sunday afternoon the Capitol Grounds were beautiful, empty, barren.

Having my feet on the ground of this storied location was far different from having my eyes on the page of a history book.  It made me realize that the best way to appreciate what this part of the city used to be, and to take stock of what it has become, is in person.  Not everyone is as lucky as we in Mechanicsburg are to have such an important location just an afternoon drive away, but with the project we are creating, we will be able to share a comparable, and equally educational experience.