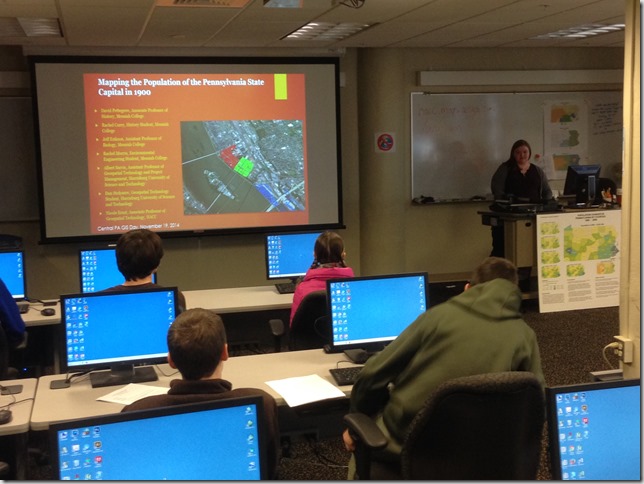 It’s been an eventful month for our work on the Digital Harrisburg Initiative. About time to round up some of the latest updates:

Since our last update, faculty and students from Messiah College, Harrisburg University of Science and Technology, and Harrisburg Area Community College presented on research related to Harrisburg’s City Beautiful movement.

The first presentation occurred at Bucknell University’s Digital Scholarship Conference which was dedicated this year to the theme of “Collaborating Digitally: Engaging Students in Faculty Research”. Professor Sarvis and I presented to a room of about 50-60 faculty and a few students currently exploring the intersection of GIS spatial technologies and undergraduate humanities research. It was fantastic. We heard some inspiring talks, including one by Professor Linda Aleci (Franklin & Marshall College) on an outstanding project titled “Curating the -City: People and Places in Lancaster, PA.” We also got the sense that we were doing something unique in creating collaboration between humanities faculty and students at Messiah College and geospatial technologists at Harrisburg University. I have used Scribd. to embed our PowerPoint presentation from the conference, and also our process paper, which the Digital Harrisburg working group contributed to:

I embed below the draft of a process paper about the work we’ve done over the last year.

Here is the presentation from the GIS Day.

Our second main activity has been to improve the connection between the federal census database for Harrisburg 1900 and the GIS map of the city in 1901. We’ve been manually going through the people-less properties in the GIS and the homeless people in the census database to place missing people into empty homes. At our last report, we had an 84% match rate between properties and census data, and a 72% match rate with the population. Professor Sarvis now reports that we’ve been able to link 45,415 individuals from the total population of 50,167 (90.5%) to places on the map.

3. Interactive Map of the City

Our third highlight is the launch of a beta version of an interactive map of the city in 1900. We’ll announce this tomorrow or Wednesday.

For the spring, our work will continue in different ways.

The Working group will:

Other courses at Messiah College scheduled for next semester, such as U.S. Urban History and Pennsylvania History, may develop the initiatives in new ways.

And student projects, including a documentary on the Harrisburg Giants, should develop substantially.

Check back this week for our announcement of the Interactive Map of Harrisburg in 1900.