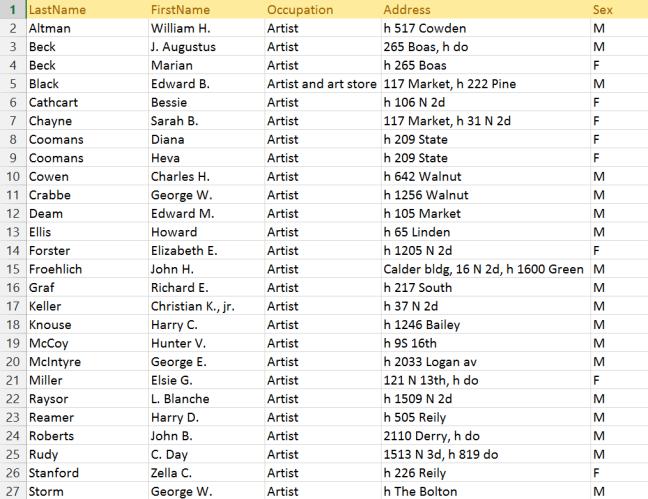 The past two weeks we’ve been getting lost in Harrisburg, 1900, as we continue to work on our second project, “City Social.” We learned how to effectively make use of Microsoft Access, as we explored the City Social Database, which is a record of the citizens of Harrisburg in 1900. This massive database includes a wide variety of information from name and age, to father’s birthplace and unemployment status. In the meantime, we were asked to dig deeper into the City Social Database, by choosing a select aspect of the population to focus on. I limited my queries to a single ward, in order to make my results more manageable and, since I’ve been focusing on Ward 7 for the rest of this project, it seemed as good a ward as any to research. As I looked through the categories included in the database, “Reading” caught my eye. What I found while exploring the literacy rates in Ward 7, 1900 actually surprised me.

In a year when much of the world was considered illiterate, literacy rates in Harrisburg’s 7th ward were quite high, as 85% of the population, 5,852 individuals, could read. This rate was a bit higher

than that of the total city population, which was 81%. There were quite a few individuals in Ward 7 whose literacy was not recorded in the City Social Database – 774, to be exact. This surprised and intrigued me, as this number represents about 11% of the Ward 7 population. It was later pointed out to me, by Dr. Pettegrew, that illiteracy wouldn’t be recorded for individuals not capable of reading, such as very young children and infants. He said that, of the 774 individuals with not value, “728 were newborn to 9 years old; 474 were under the age of 5.” This percentage of the population, however, is higher than the ward’s illiteracy rate. Those who are listed as illiterate in the database include 552 total individuals: 198 white women, 193 white men, 88 black men, and 73 black women – only 7.5% of the total population. This low rate of illiteracy impresses me, as it’s lower than the national rate of the same year. According to the National Assessment of Adult Literacy, United States illiteracy rates were at 11.3% in 1900.

Literacy rates in Harrisburg, 1900, seem to have been highest among white women with no listed industry, which I found intriguing, as this would be homemakers, full-time mothers, and upper class women. The lowest literacy rates in this ward, according to my queries, were among black and white male day laborers and the unemployed. Regardless of these findings, there doesn’t seem to be a strong correlation between industry and literacy, thus, it comes down to the individual. Also, the mulatto and Chinese populations of the city were, as a whole, literate and the black and white populations seem to be similar in their literacy rates, despite the differences in total population size.

A map of Harrisburg’s wards.

One thought on “Harrisburg’s 1900 Population… In the Books”