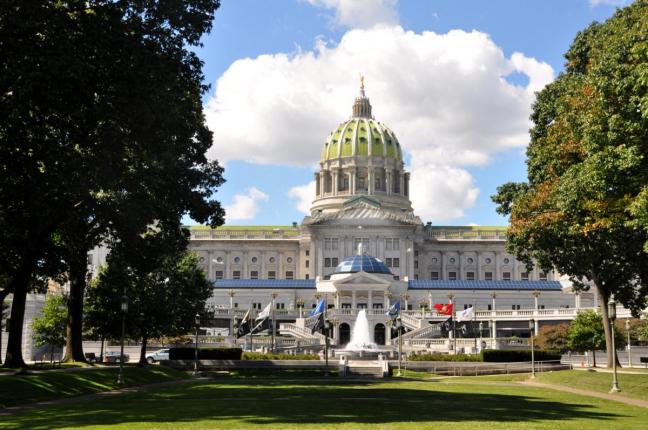 We detailed the basics of The Commonwealth Monument Project (also referred to as the Old Eighth Ward Project) in a post last month, but now we have more information to share!

In January, we introduced the Look Up, Look Out campaign. This portion of the project involves “Twelve Stories, Twelve People, Twelve State Offices,” which will be twelve 24 x 36″ posters telling twelve narratives about the Old Eighth Ward. These stories are connected to place, centered on themes and individuals, and focused on the view from Commonwealth building sites. These posters intend to represent a wide variety of the historic Harrisburg population, including immigrant communities.

These posters (at the State Offices) will include a geo-located photograph of the Old Eighth Ward and a QR code and URL leading to a static website including content on a theme (the stories) and a biography (the people). These installations will allow Capitol workers and visitors, in selected locations around the Capitol Complex, to see what the Old Eighth Ward would have looked like from the windows of the various buildings and learn a snippet of information about the once-existent region.

Another facet of this project is called “100 Voices.” Volunteers and students have worked to identify 100 significant individuals from the African-American community of late 19th and early 20th century Harrisburg. The names of these individuals will be inscribed on the pedestal of the monument, while a series of “White Carnation” events at the Hilton Hotel on Second Street will recognize and honor the descendants of these 100 important people.

Similar to the Look Up Look Out project, Digital Harrisburg student researchers will contribute to the work, in this instance by researching Census records to locate those on the list. Once found, we will fill a digital postcard that we designed with the Census information and post it on our Facebook page and as further installments of this blog.

This research is like a mystery, tracking down people throughout time and doing our best to understand who they were and what they did, and it is a mystery that we are beginning to unfold for you. These individuals and communities are unique and multifaceted, so we could not expect to encapsulate their essence entirely, but we hope that this project will grant them the respect and recognition they deserve.