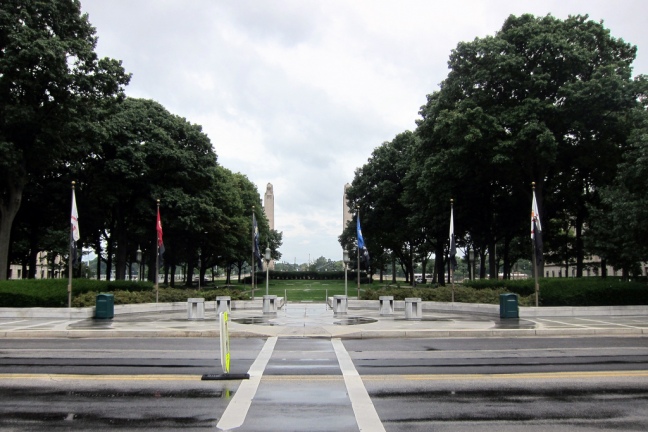 The image above shows the picturesque sprawling green of Capitol Park. It is a beautiful extension of the impressive Capitol grounds with a remarkable fountain, tree-lined walking space, and view of the State Street bridge. For sure, many a visitor has marveled over this magnificent edifice; according to Lenwood Sloan, a local facilitator of cultural and heritage programs, “over 100,000 people per year enjoy a free tour of the Capitol building or a stroll around its grounds each year.” Also, locals have the pleasure of living in close proximity to such an area. However, with beauty comes consequence. Capitol Park did not always exist, and before this view looked as it does today, it was full of homes, churches, schools, businesses, and factories.

The Old Eighth Ward of Harrisburg, shown below (the area within the highlighted boundaries) as it existed in 1901, was an exceptionally diverse neighborhood of the capitol city. Looking at the Eighth Ward as a whole (all four precincts)

More specifically, within the Old Eighth Ward itself (mainly two precincts of the entire ward)

Therefore, with the complete demolition of the Old Eighth Ward, the black community of Harrisburg was adversely impacted. Those who could not find alternative housing in the city had to move beyond the limits of the capitol area. 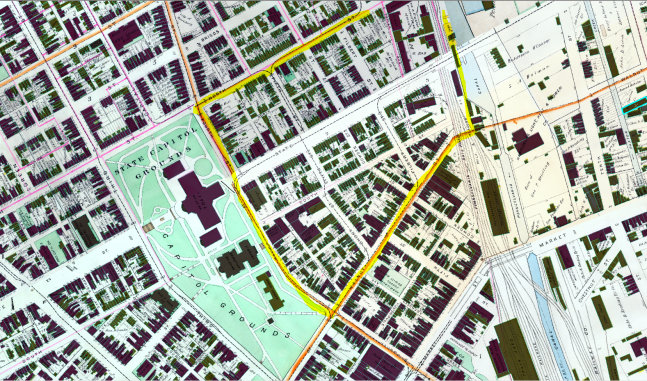 To briefly review the historical circumstance, under the auspices of the City Beautiful movement of early 20th century Harrisburg, the Fox-Tunis Act of 1911 called for the extension of the Capitol grounds. A new Capitol building debuted in 1906 after a fire destroyed the previous structure, and it was a magnificent sight. Established by the act, between the years of 1911 and 1917, the Capitol Park Extension Commission took control of the project to further the beauty of the new structure. Early on in the process, they notified the residents of the Old Eighth Ward that they needed to vacate their properties for the beautification of the city as a whole.

Lenwood Sloan took notice that though it sits on the footprint of the Old Eighth Ward, the Capitol Complex holds no structures or icons of the historic district. In addition, Harrisburg has no African American monuments, so Sloan began to work with the Pennsylvania State Senate and the House of Representatives to change this. The proposed monument will include a sculpture and the names of 100 people who lived in the Old Eighth Ward. Sloan desires this project to convey that while the Old Eighth Ward is no longer part of the Harrisburg landscape, its legacy remains in the memories of the descendants still in the Capitol area.

As a result of this effort, in January several Representatives and Senators will move for a joint resolution pertaining to the gifting of a monument to the Commonwealth. Taking place in August of 2020, the presentation of the monument will coincide with the 150th anniversary of the 15th Amendment to the Constitution, which granted suffrage to black men, and the 100th anniversary of the 19th Amendment, which extended the vote to women. Along with its two partners, the Dauphin County Public Libraries and the PA Commonwealth Diversity Forum and numerous local organizations and individuals contributing to the commemoration, the project will take form over the next several years.

We, the Digital Harrisburg team, will research our population data to provide these names. It will reside on the State Capitol Grounds, since that it where those named on the monument lived before the leveling of the area.

Additional components of this project include “Look up and Look out,” “Re-imagining the Old 8th Ward,” and “Live and Learn: The Pathway to the 15th Amendment.”

We are looking forward to the implementation of this remembrance, and we will continue to post with future information.